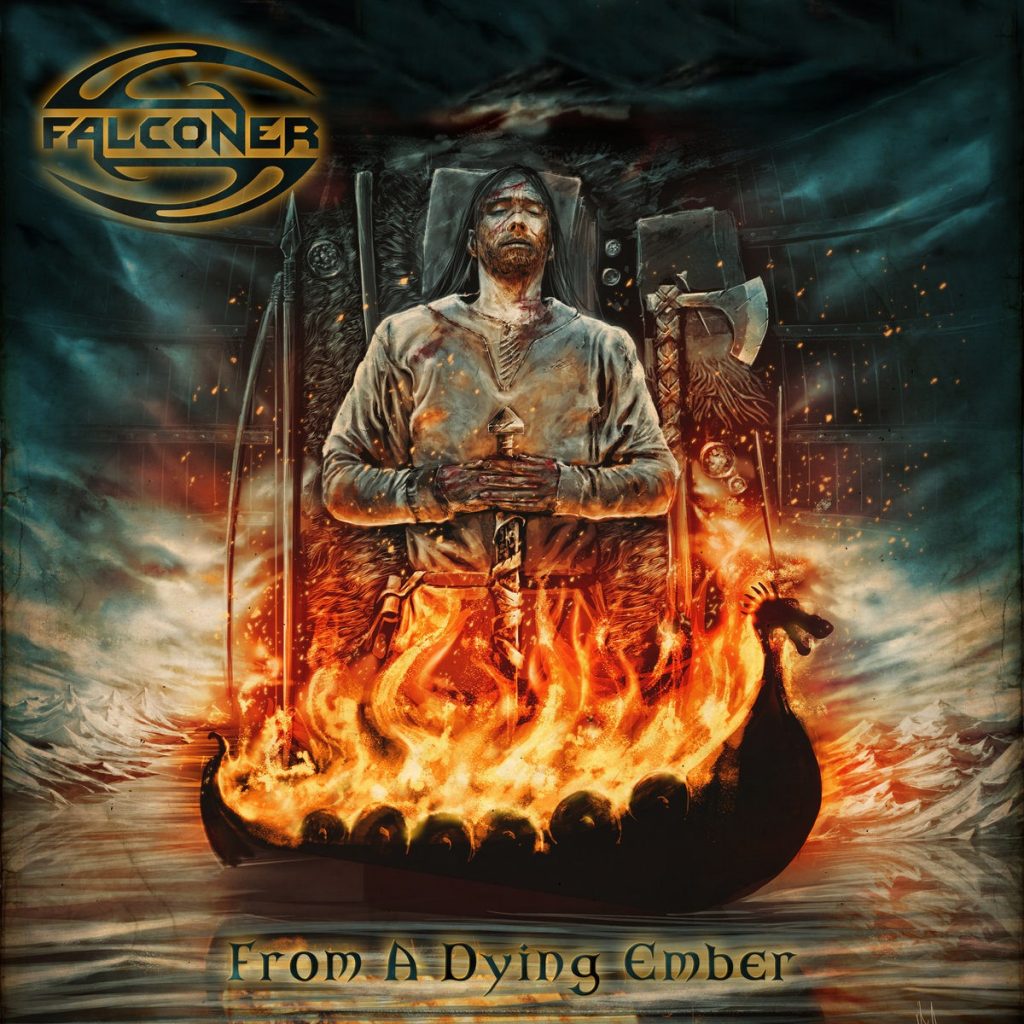 After 20 years of activity and 9 albums, Falconer say goodbye with From A Dying Ember. I had already had a distinct premonition when I first saw the emblematic cover (as usual created by artist Jan Meininghaus): the familiar, mysterious Nordic warrior, who accompanied us in the previous chapters, finally lies lifeless, his face marked by the battle, in the burning vessel leading him through his solitary last journey. The serene expression on his face tell us he is leaving in peace, knowing that he has given everything, through thick and thin, without regrets.

Unfortunately, my hunch was well-founded, the cover accurately (and deliberately) symbolizes the reality: a few days before the release of the album on June 26 2020, Stefan Weinerhall posted on the band’s Facebook page an official statement. And the fans, excited and quivering for the new release 6 years after the wonderful and enthralling Black Moon Rising, eagerly waiting for juicy previews and curiosities about the 9th album, are suddenly left with a bitter taste in their mouths.

It feels really weird when a band you’ve followed for 20 years suddenly is no more. Especially if it’s the first band you really care about that ceases to exist since you started listening to music with intent and passion. The sad certainty that they won’t come back to thrill you with a new work is only partially mitigated by the knowledge that you can always revise and savor the existing material.

Having kown them for two decades, the band members are a bit like friends for you. Maybe you’ve never met them in person, but you’ve heard their “voice” thousands of times, you’ve even seen them on stage (mainly thanks to YouTube, given Falconer’s limited live activities and the fact they never released a live DVD). Sometimes you haven’t seen or heard from them for years, but time and time again they have returned to be a significant part of your life.

The high flames devouring the dreki on the album cover certainly mean the end of an era. Yet, having assimilated From A Dying Ember I can say this time fire also represents much more: it is the burning passion of the artist, sometimes blazing with the maximum possible splendor, consuming with fury everything that animates it, leaving an indelible sign in what surrounds it, to then fade and, slowly, languishing to become invisible again to brood under the ashes. I like to think that the Falconer will come back one day to inflame our hearts with new stories, narrated by the extraordinary voice of Mathias Blad who, like excellent wine, matures and improves with age.

In the meantime, the certainty is that the flame of Falconer continues to shine even in the farewell album. Realistically, the Swedes couldn’t have said goodbye to us in a better way after 20 years of honorable career. At first, however, I was very skeptical: the opening single, “Desert Dreams“, seemed to me a standard song, calculated and not visceral, lacking in bite. All the opposite of the spirit that animated Black Moon Rising. Impression that I had also listening to the album opener, “Kings and Queens“, and then I began to fear the worst. But fortunately my fears about the quality of the album were unfounded.

Listening to From a Dying Ember in its entirety, it all makes sense. It only takes a few listens to get into the spirit of this work and begin to appreciate the songs, which range from decent to exceptional. As is normal, some take immediately, others require more time to be assimilated. “Kings and Queens” itself is now one of my favorite tracks, and the soft chorus, which initially turned my nose up at it, is now one of the most enjoyable sing along moments on the album. As per the Swedes’ tradition, there is no shortage of splendid choruses to sing with Mathias: among my favorites is the anthemic one of “In Regal Attire”, which is not intended to reach the absolute majesty of “Halls And Chambers” on the previous album, but is cool nonetheless. From a Dying Ember is a very varied and rich album, but I’ll dwell on two tracks: my favorites and, in my opinion, also the most significant of the lot.

“Rejoice The Adorned” is a resounding ballad, with just piano and vocals. I have no words to describe its beauty. It continues in the wake of Portals of Light and Long Gone By (of which, by the way, the acoustic versions have finally been recorded: they are 2 of the 3 bonus tracks of the Digipack edition of From a Dying Ember), but manages to dig even deeper into the soul of the listener, enraptured by the poignant voice of a Mathias Blad that amazes for intensity and delicacy. Without a trace of doubt one of the most beautiful pieces of the entire discography of Falconer and not only. Even Stefan Weinerhall considers it one of his best songs ever (although he actually does not play any part of it on the record). He reveals its genesis:

I had already written some of the music, but then about a year ago my grandmother passed away, then I got the idea for the lyrics because although I was mourning her death, I told myself that I should be really happy that our affection meant something. So it was really important to mourn his passing. That’s the inspiration for the lyrics. After that, the song really grew and from the beginning it was supposed to be an acoustic ballad. But then Jim (Hedlund, the other guitarist – Ed) told me that maybe we could play it with piano, and it was just perfect. I mean, Mathias’ voice really enchants, it’s perfect for the most delicate and sweet songs.

A radically different track is the closer “Rapture”, which represents a coming full circle on several fronts. The first song Stefan Weinerhall has written together with old bandmate Karl Beckmann in 20 years, it is an epic return to the origins, when Falconer was born from the ashes of the recently deceased Mithotyn. Particularly interesting and emblematic the background behind the birth of the song, as reported by Weinerhall himself:

The last song on the album, “Rapture”, started out as a new attempt at a Mithotyn song, intended to appear on a re-release of all Mithotyn demos. NOT in any way a Mithotyn comeback, just a way to generate excitement and interest in re-releasing the demos on CD. Anyway, since Karl Beckmann and I had written the song, we ended up realizing that neither of us really wanted to allocate the time necessary to rehearse and record the new song. I asked Karl if I could instead take it, put some new lyrics on it and use it for Falconer, I also made some minor changes in the arrangement and replaced some guitar melodies with vocals. Putting it as the last song really feels like closing the loop.

For my part, I can only say that I adore this gem, which for freshness and intensity is at least a cut above all the other songs (the ballad is a case in point) and which, probably because of the connection with Mithotyn, most of all recalls the atmosphere of the legendary debut album of the same name, Falconer.
“Rapture” is the ideal climax and conclusion of an excellent work, a perfect farewell album. From a Dying Ember is an anthological work, which contains all the facets shown by the band in 20 years of career. It can be funny and melancholic, dragging and dramatic, rich and no-frills: as soon as it ends you want to start it again, to return to make route to remote regions lost in the mists of the past and present, immersed in a state of languid bliss. 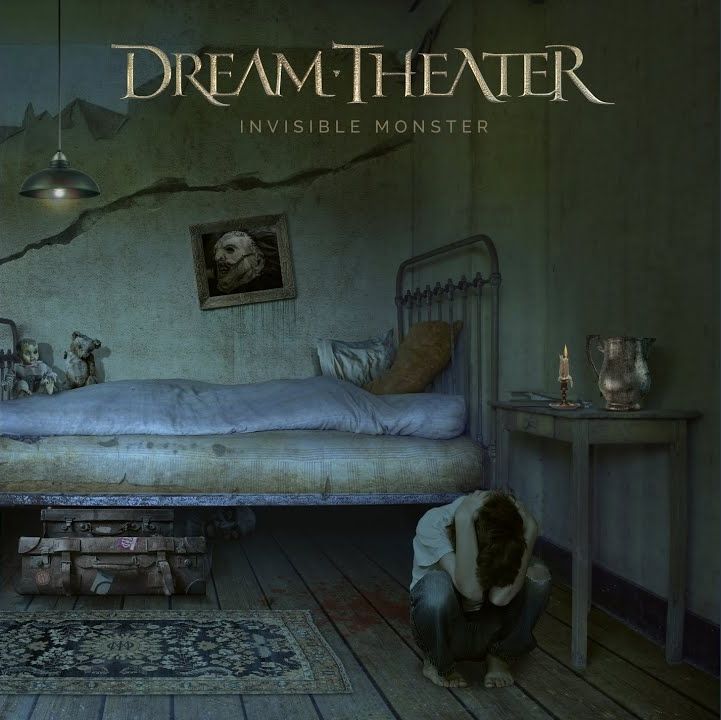 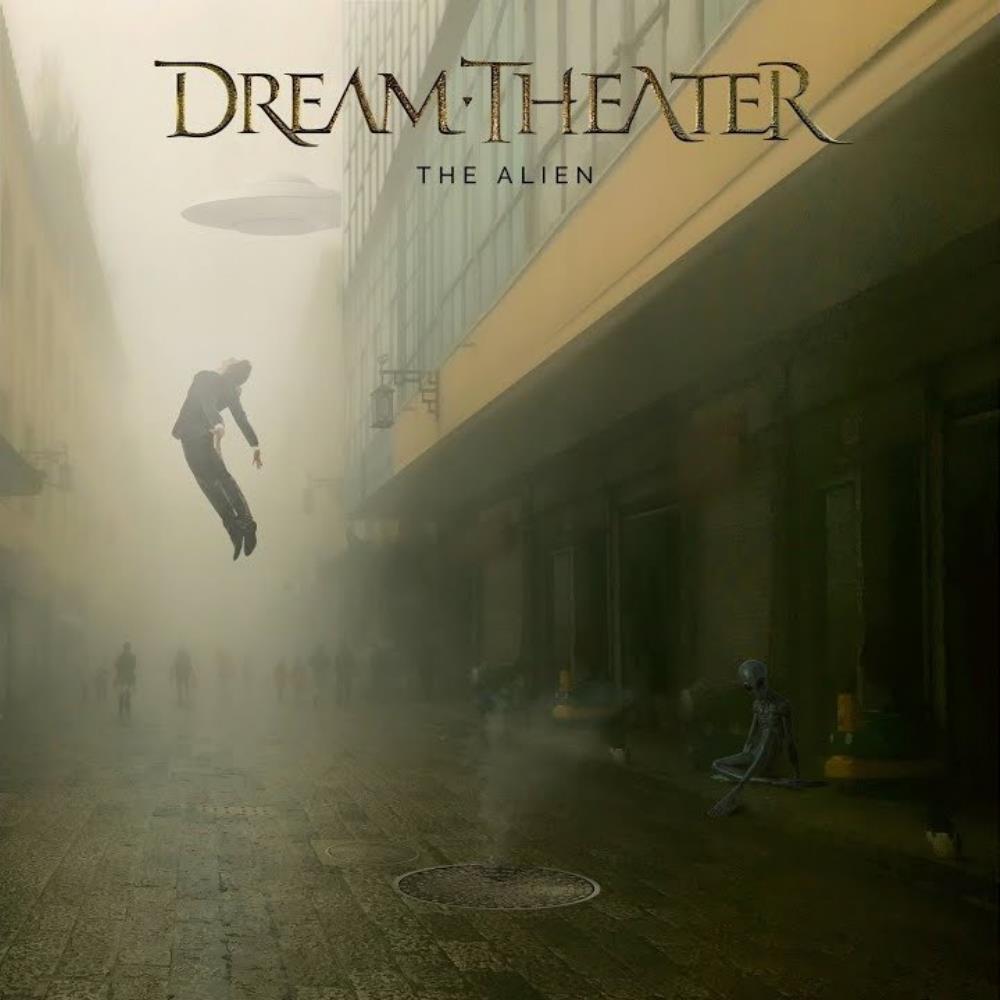 RT @bag_of_hats: Ladies and Gentlemen! Rogue64 is ready to be purchased and downloaded from Itch: #c64 #rougelike…

Stratego by Iron Maiden is the second single off the new album Senjutsu slated for release in a couple of weeks on September 3. The song is

After 20 years of activity and 9 albums, Falconer say goodbye with From A Dying Ember. I had already had a distinct premonition when I